For the past week I've watched my beautiful state burn.

It all started last Monday with a huge windstorm, blowing hot air eastward across Oregon.  Unusual for this time of year, it was branded as a "historic" wind event, with gusts exceeding 50 mph in Portland.   Fire danger was off the charts.  In an area that hasn't seen measurable rain most of the summer, forests were bone-dry and ripe for wildfires.  It was a disaster waiting to happen.

In the wee hours of Tuesday morning, all hell broke loose.

Downed power lines ignited several fires around the small towns of Detroit, Gates and Mill City, east of Salem off of Highway 22.  People had minutes to evacuate.  Detroit and Gates burned to the ground, and Mill City lost several structures.  The fires merged with another forest fire already burning to the north creating a huge inferno that threatened Silver Falls State Park and several nearby towns.

Southeast of Portland, another fire erupted along the Clackamas River.  Campers along several riverside campgrounds hastily evacuated as the wind-driven flames grew exponentially.

East of Eugene, along the scenic McKenzie River, another fire decimated several small towns, as the occupants ran for their lives.

On the coast, a fire threatened the town of Lincoln City, prompting evacuation of nearly half the town.

And in southern Oregon another wind-driven fire destroyed the towns of Phoenix and Talent, reducing entire neighborhoods to rubble.

By Tuesday evening, a total of 35 wildfires were burning across the state of Oregon.

All week I nervously scanned fire and evacuation maps, watching shaded areas indicating the fire perimeter cover more and more favorite hiking trails and inch closer to nearby towns.  Smoke from the fires began pouring into my city, creating ugly orange-tinged clouds.  The sky looked simply apocalyptic.  Thursday, one fire crept perilously close the Portland Metro area, threatening a SE suburb.  Occupants of an entire county were placed on some level of evacuation notice.  One of my coworkers who lives in Oregon City, notified of a level 2 "get set" notice, had to pack up his home and be ready to evacuate. 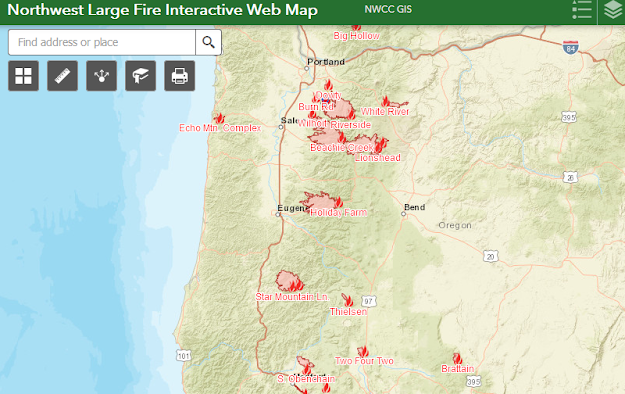 Winds raged for three long days until finally dissipating on Friday.  Although fires continue to burn, and likely will until the winter rains come, at least their growth has now slowed.

But the damage has been done.  One million acres of forest burned.  At least ten people dead.  Over 40,000 people evacuated, many not sure they will have a house to return to.

Three years ago, watching the Columbia River Gorge burn, I thought the Eagle Creek Fire was tragic.  This has been much worse.  So many favorite hiking areas are now gone.  Among them:

Table Rock.  Which I'd just hiked this past June.

So much destruction - it's heartbreaking.  So many wonderful forested areas are changed forever.  I can't even begin to comprehend what these once places will look like now.

As the fires continue to burn, my entire state is blanketed with a thick layer of acrid smoke, pushing air quality into the "hazardous" category and forcing me indoors.  Although I'm sorely missing hiking this weekend, I am thankful I still have a home to be stuck inside.