Mt. Bachelor ski area is located on a dormant volcano.  To the northwest side of the mountain is a large cinder cone, formed during a time when the mountain was more active.  This cone is not served by any lifts, but people like to hike "The Cone" to get fresh tracks. 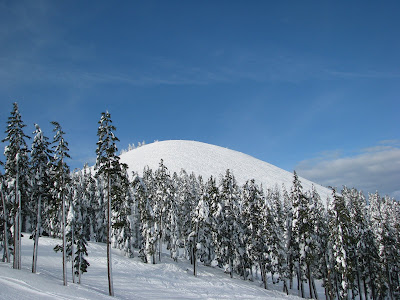 The Cone rises up from the ski area below.
On powder days, I've always looked longinly at The Cone, wanting to hike up there any make some tracks of my own.  But I've never convinced anyone to climb up there with me.  Well - that is - until I made a spring break trip to Bend late last March. 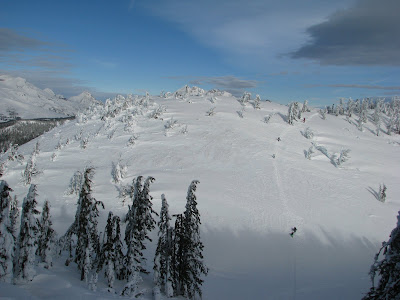 People climbing up the side of "The Cone."
The snow gods had  been good to us the night before, and graced Mt. Bachelor with six inches of fresh, fluffy powder.  My brother Dale and I had made a couple of runs, and delighted in the snowy goodness.  That's when I looked up at The Cone and mentioned to Dale that today would be a great day to ski its slopes.  Dale took a little bit of convincing, but finally decided he would join his crazy sister in her quest to conquer The Cone.

To access The Cone, you must ski down an adjacent ski run as fast as you can to try and get as much distance up the side of The Cone's slopes as possible.  When you run out of momentum, it's time to take the skis off and hike the rest of the way up.  Although it always looked daunting, I found the hike to take no more than 15 minutes.  Yes, it was a steep and strenuous climb, but not as bad as I thought I'd be. 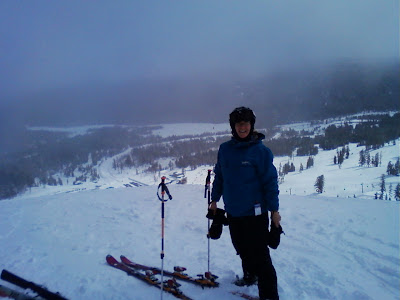 Top of The Cone! Yahoo!
Once on top we took some time to admire the views.  On that day, I did not have my camera with me (can you believe it??) so Dale snapped a photo of me with his camera phone.  Proof of my historic climb!
Then we clicked into our skis, chose our lines, and had our best runs of the day down the knee-deep powder that graced the slopes of The Cone.  There was much whooping and woo-hooing as we carved through the fluffy stuff.  When we reached the treeline, we stopped to admire our tracks.
I was ready to climb up and do it again, but Dale was tuckered out.  Once was enough for him.  So we skiied to the lift, and went to check out the Northwest Express side of the mountain.
So now I'm an official "Cone-Head."  Next powder day I find myself at Bachelor, you can bet I'll be up there!
Posted by Linda W. at 9:06 PM 1 comment:

Another Great Day on Mt. Hood!

This year, January and February were a little bit light in the snowfall department up on Mt. Hood.  However, the side benefit of no snowstorms is that we got lots of sunny days.  (Spring skiing in the winter---gotta love it!)  And if you can't have fresh powder, sunshine is the next best thing!

This blog post features photos from a really beautiful day in mid-February at Mt. Hood Meadows. 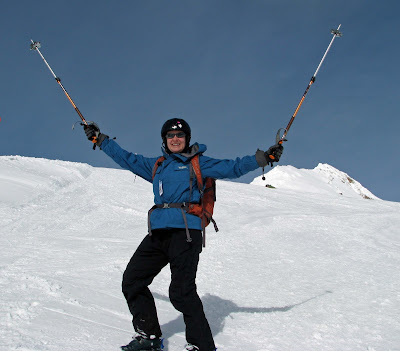 Queen of the mountain! 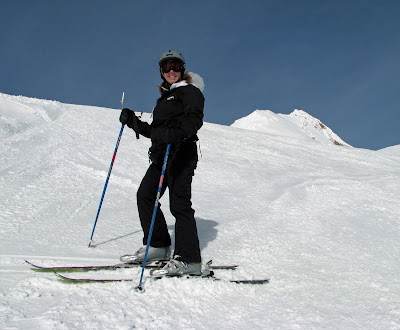 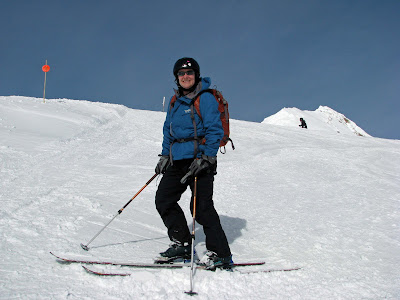 A bad day skiing is always better than a good day working! 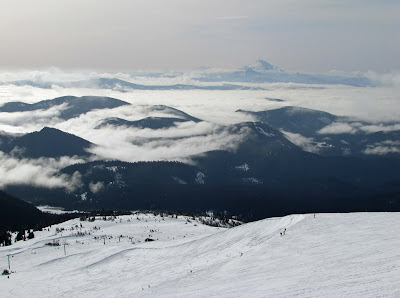 Great views of Mt. Jefferson and low clouds over the Cascades from the top lift at Meadows. 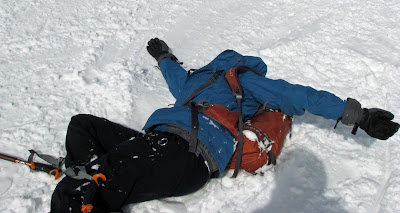 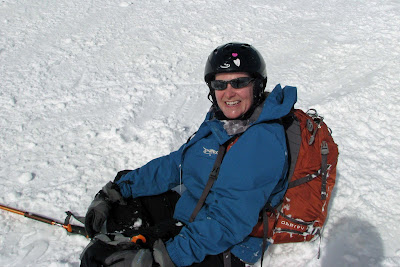 Years ago, Kim gave me the nickname "Biff."  Now you know why! 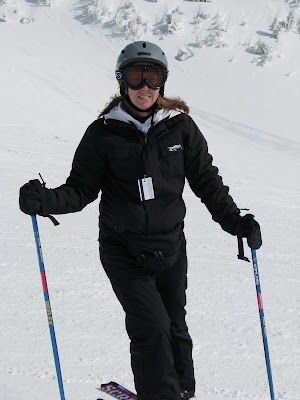 I think this is a great shot of Kim. 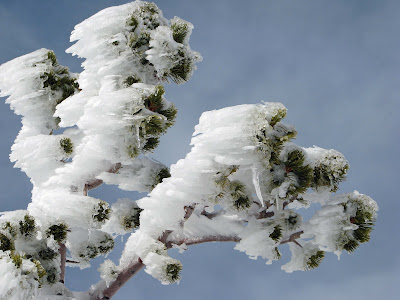 The remnants of an overnight ice storm can be seen on the trees.  I thought these ice formations were especially cool.  You can tell which way the wind was blowing. 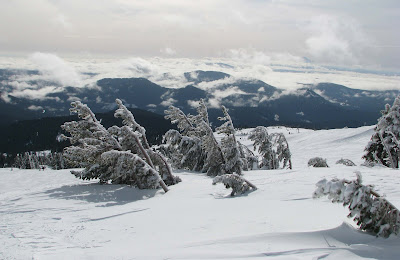 The trees seem bent over from their weight of ice. 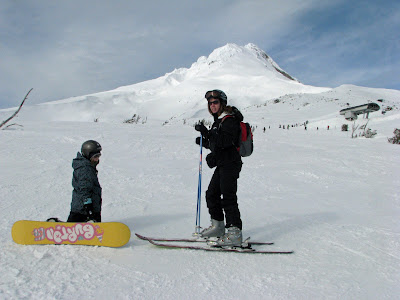 Kim's daughter joined us in the afternoon.  She's learning to snowboard, and is picking it up quickly. 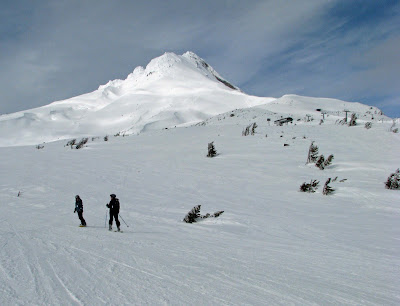 Kim and her daughter a-comin' down the mountain. 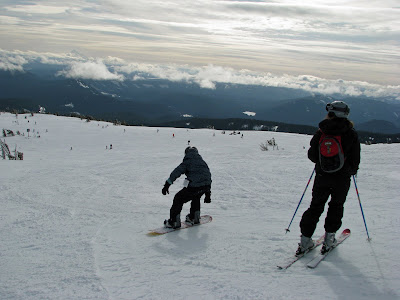 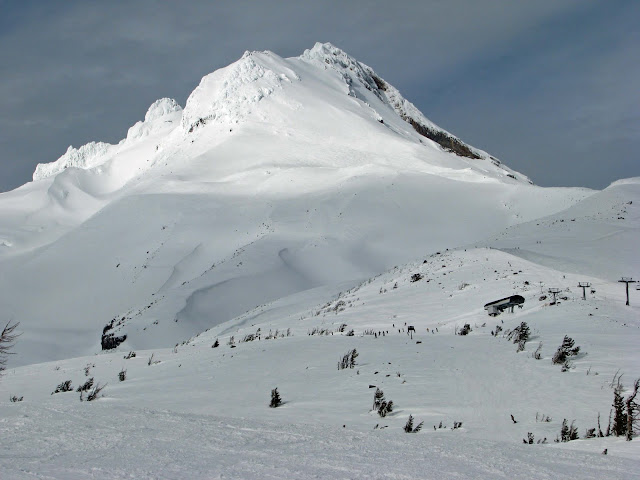 This blog post would not be complete without one more great shot of my favorite mountain.  Hood looks really good when it's covered in snow.   Sunshine, good turns, and great views.  Another perfect day on the mountain!
Posted by Linda W. at 8:24 PM No comments: