Ok, there's a story behind the title of this blog post.  Every Monday night, I go to spinning class at my gym.  My spinning instructor is a very enthusiastic women, who loves to yell "woo-hoo!" at various times during class.   She is also a runner, and entertains us by telling stories from the races she runs.  Not too long ago, she shared an observation with the class - that in races, runners don't say "woo-hoo."  (She discovered it is not considered proper running etiquette to be woo-hooing as you are passing someone).  She asked another woman in our class who is an avid bicyle rider if bikers "woo-hoo."  No, we were told, bikers do not say "woo-hoo" (apparently for the same reason as runners).
"Well" I piped up -"Skiers say 'woo-hoo', especially if its a powder day!" 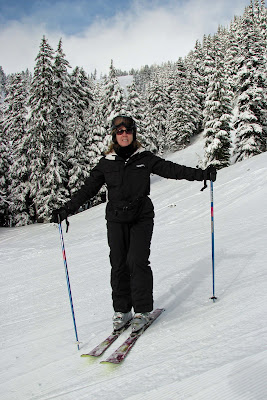 The next weekend, I went up skiing with my best ski-buddy Kim.  I told her the story from my spinning class.  After that, every time we stopped, or finished a good run, I let out a loud "woo-hoo!"  And then I'd turn to Kim and remark: "skiers say woo-hoo!" 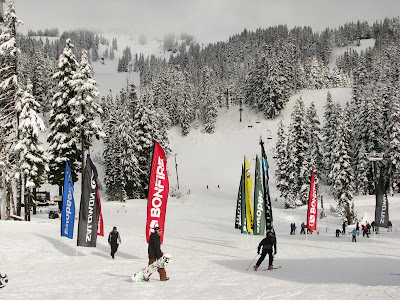 Meadows base area was all decked out with colorful flags for the day.  The flags made a nice contrast with the white, snow-flocked trees. 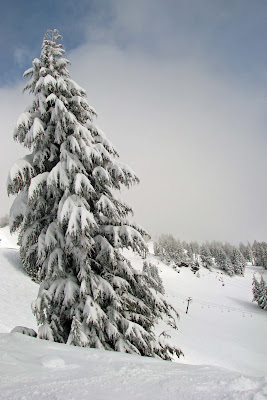 There'd been a small dump of snow the night before that coated all the trees.  Then the sun came out.  The snow sparkled in the sunshine, making everything look especially beautiful.  And the powder was a lot of fun to make tracks through (woo-hoo!!) 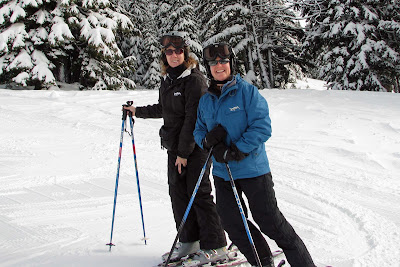 Some nice guy saw me with my camera trying to take some photos and offered to get a photo of Kim and I.  This one turned out really nice.  We saw the guy later in the lift line, and I told him "there's our photographer!" 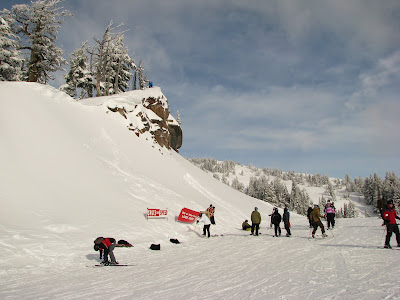 We got off of the lift, and saw a ton of people standing around looking up towards a rock outcrop.  Turns out there was a snowboarder up on top of the rock, getting ready to jump off.  You can barely see his blue jacket in this photo.  So we stuck around to watch the show. 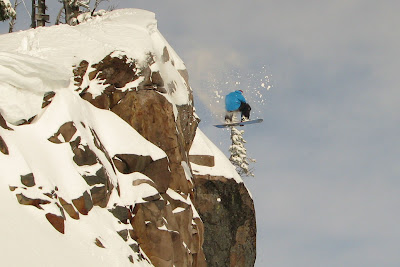 I happened to catch the guy in mid-air as he launched himself off the rock.  He landed safely in the soft snow below, and immediately climbed back up to try it again.  Woo-hoo!!! 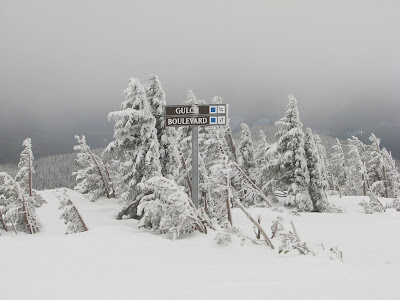 After lunch, the fog rolled in and took away our nice sunny day.  But the scenery was still nice - the snow covered trees by one of the trail signs made for a good photo op.

It was a good day on the slopes - sharing sunshine, powder, and killer runs with a good friend.  It doesn't get any better than that --- WOO-HOO!!!!