Let's transport ourselves back to the beginning of this month.  A time when Coronavirus was still a far-away illness on the other side of the world.  Back when we could still hike the local trails.

One sunny, but chilly late winter's day, my friends Young and John invited me for a trek in the far eastern Columbia River Gorge.


Oftentimes when the western Gorge is rainy, driving a mere 60 miles further east produces radically different weather.  Even when Portland weather is gray, the eastern Gorge has a reputation for perpetually sunny skies.

With that in mind, Young and John wanted to hike the trails at Washington's Columbia Hills State Park.  Home of the Dalles Mountain Ranch, it's one of my favorite spring wildflower haunts.  But, since flowers don't usually peak here until mid to late-April, I was surprised my friends wanted to hike in early March.  Having never visited any other time of the year, I had my doubts.  Would there be anything interesting to see right now?

But, desiring to get some hiking miles in and catch up with my friends, I accepted their invitation.

Despite sunny skies, a chill wind blew as we stepped out of John's truck at the trailhead.  He'd parked at the Crawford Oaks Trailhead off of State Route 14.  All my previous visits to this park, I'd driven straight to the historic ranch buildings, three miles due north from here.  So today I'd be traversing a "new to me" trail!

The climbing started right off the bat, as my friends and I huffed and puffed up a steep, rocky abandoned road.  But quickly warmed by our efforts, the rewards came quickly.  We were treated to fabulous Mt Hood and Columbia River views after the first quarter mile.  Tall basalt cliffs rose vertically from the river's edge.

The first mile was a steep climb up and over those cliffs via an abandoned road.  Then our track dived downhill to cross a tiny creek lined with gnarly oak trees.

Past the creek, trails branched out in both directions.  One was a direct path to the famous ranch buildings and spring flower fields.  However, the other featured a wide loop meandering through rolling hills, eventually connecting back to the ranch.  Wanting to get maximum mileage for the day, my friends chose the longer loop.

More climbing!  My friends and I ascended another steep slope through barren grasslands.  Huge electrical transmission towers lined the top of the hills.  Transporting power directly from the nearby Dalles Dam, these structures were impressive.  Both Young and John are engineers who work for local power suppliers, so it was interesting to hear their "shop talk" about the powerlines.

Although the big wildflower season was still weeks away, I was delighted to spot a few straggler grass widows pushing up from the prairie.  These delicate purple flowers have the distinction of being the first spring wildflowers in the Eastern Gorge.  Although usually not prevalent until early March, a warmer-than-normal winter caused an especially early grass widow bloom this year, and their season was now already nearly over.

As we climbed, the views kept getting better.  I'd stop to grab a photo, only to find a much better vantage point further up the trail and stop again.  Progress was glacially slow.  I finally had to pack the camera away and hoof it up the rest of the hill to catch up with my friends.

At the very apex of the final hill was a stunning viewpoint.  The Columbia River spread out in both directions, framed by stair-stepping basalt cliffs.  A single plaque explained the geology of the region, stating the Gorge was created by massive floods from melting glaciers throughout the ice age.


Now our trail turned towards the ranch, contouring across rolling beige hills.  Young mentioned these same hills would be covered in yellow balsamroot blooms by mid-April.

Although stark, the emptiness had a beauty all its own.  I enjoyed walking through these wide-open spaces.  They reminded me of the South Dakota prairies of my childhood.

We came upon a familiar road and fence line.  This was where I'd come for several years to photograph the wildflowers.  Without the colorful blooms it looked like a totally different place.

Young and John crossed the main ranch road, and hiked up a small hill to the main parking area with a restroom and picnic tables.  Perfect place to stop for lunch!  Normally used to sitting on the ground and eating lunch, my friends and I relished the luxury of having an actual table.

But oh, was the wind howling!  It forced my friends and I to bundle up.  Lucky for us we'd brought our thermoses of hot tea, which warmed our insides.

On our return trek, having not seen anyone except a couple of women all morning (who warned us vehemently about ticks) my friends and I ran into several hiking parties.  We even saw two people on horseback from a distance.

Even with the other hikers, the trails were still mighty empty out here in the Eastern Gorge.  After braving the crowded trails around the Oregon Gorge waterfall corridor, it was a welcome change.  Give it another month though - once the wildflowers start blooming, this place will be crawling with people.

Well in a normal year it would have.  Thanks to COVID-19, his state park, along with all the state parks in Oregon and Washington are now closed indefinitely.  In light of current events, I'm glad I decided to join my friends on this hike when I did.

This year it looks like I'm going to miss the entire Columbia River Gorge wildflower bloom.  Although I've had the privilege to photograph this special event for many years, I'm sad to miss one of my favorite seasons.  Yes, I know it will be there next year and I can always look at past images to tide me over for now.


Want to see what this place looks like when the flowers bloom?  Check out my post from 2016.

What a crazy, unsettling week it's been.  The coronavirus hit my state and life has changed.  Monday, my office abruptly announced it was closing, and all employees that could had to telework.  What followed was a mad scramble on my part to secure a laptop and learn how to log into my work's computer system remotely.  Friday, it was announced that two employees in my building were exhibiting coronavirus symptoms.  Luckily these folks were not from my floor, but still scary and upsetting all the same. 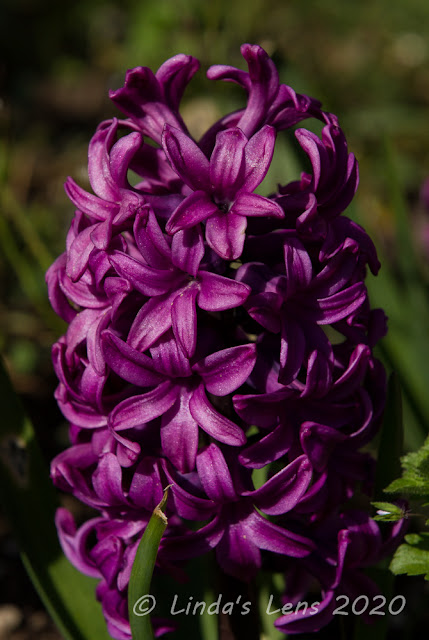 Thinking a hike would be a great stress reliever, I used my Friday off to explore one of the Columbia River Gorge trails.  Although I picked a less-traveled loop, I still encountered many more people than expected - and some weren't doing a good job of social distancing. 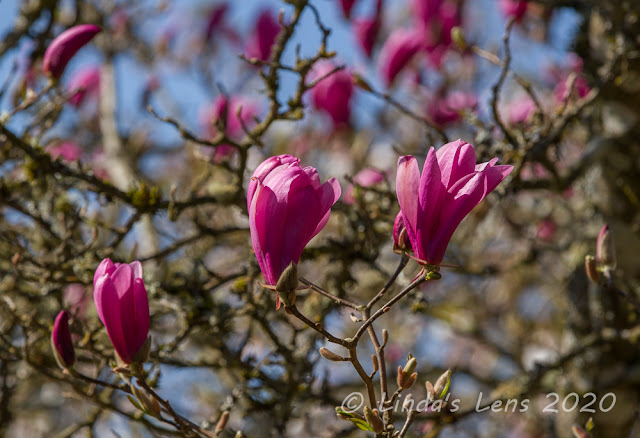 Not wanting to add to the crowds, and keep any germs I may have to myself, I made the decision to stay put at home for the entire weekend. 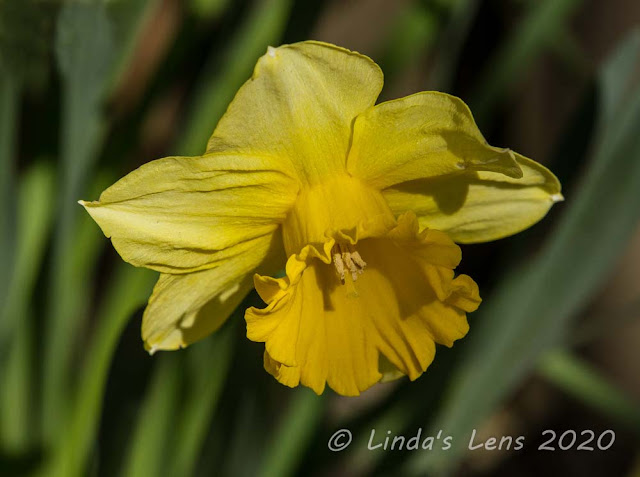 The weather was gorgeous - warm and sunny.  The flowers and trees here in Western Oregon are in full bloom.  With so much beauty nearby, it's easy to forget about the pandemic looming. 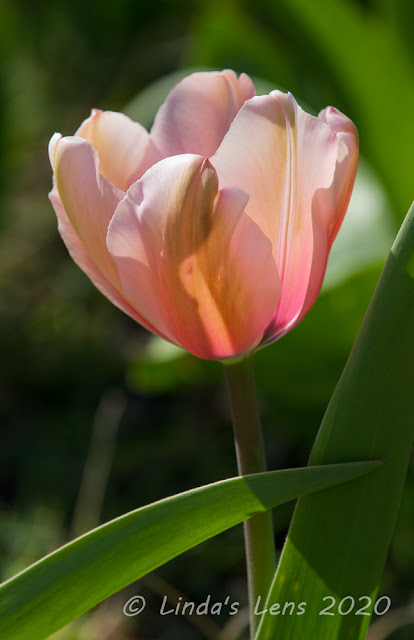 Since I wasn't hiking to any stunning places I instead decided to capture the spring blooms in my own backyard. 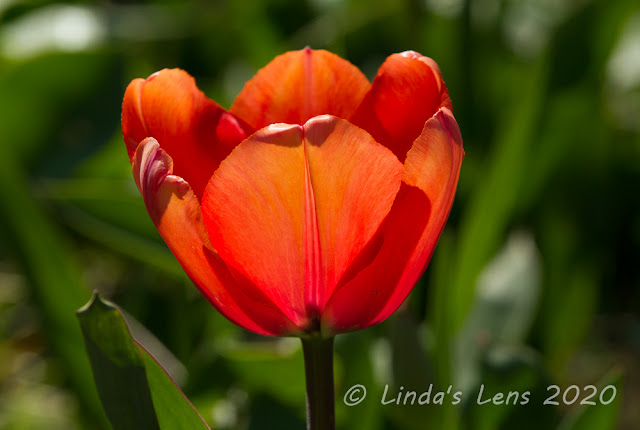 Our plum tree is in full blossom mode, the tulips are just beginning to bloom, and there's still a few daffodils sporting cheerful yellow flowers. 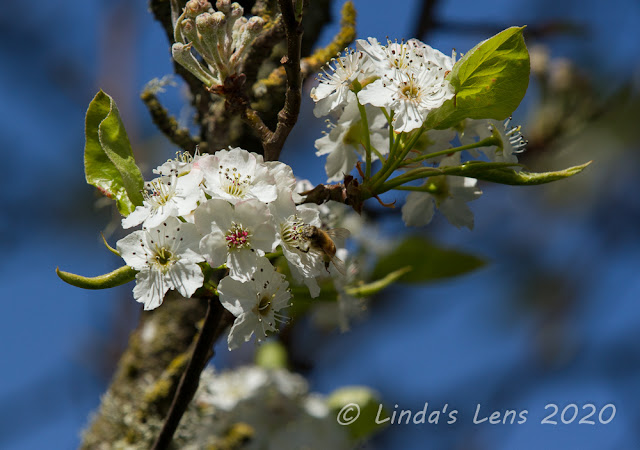 Despite our governor's plea to stay home the Columbia River Gorge and Oregon coast were packed with people this weekend.  I fully expect a lockdown to be announced tomorrow in my metropolitan area, if not statewide.  If it slows the virus spread and saves lives, I'm all for it. 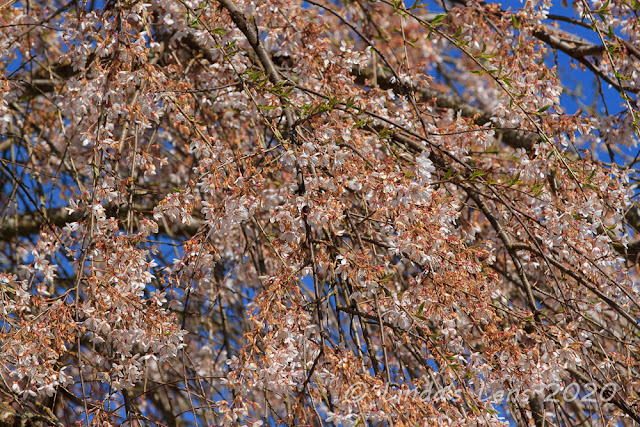 I hope the photos in this post will give my readers some happiness in these scary times.  Stay safe and healthy - but most important, stay home if you can!

Lately I've been digging sunrises.  It all started one morning in late January when I was driving up to Mt Hood for a day of skiing.  The sky erupted into the most spectacular colors, enhanced by unusual pebble-shaped cloud formations.  The hues ranged from pinks to reds to orange.  Later, a multitude of photos showcasing this spectacular sunrise graced local social media.  Of course since I was a.) driving and b.) didn't have my good camera with me, all I could do was to gaze longingly at this amazing sky show - and try not to drive off the road.

Now I'd caught the sunrise bug.  Having seen lots of photos from a place called Jonsrud Viewpoint, and realizing this vista was not far off my route to the mountain, I decided to make a stop on my next trip.  Two weeks later, I arrived at the viewpoint just in time to watch the sun crest over the mountains.  After capturing the above image I was smitten with the fabulous views of Mt Hood and the Sandy River valley.  How had I missed out on this place until now?

The following weekend, a nice sunrise was predicted for Saturday morning.  On my way through the Columbia River Gorge to the day's destination, I decided to leave my house early enough to catch daybreak.  I arrived at the Portland Women's Forum State Scenic Viewpoint in plenty of time and sat in my cold, dark car for half an hour before the sky began turning colors.

Although not as impressive as the first late-January sunrise, it was pretty all the same.  The Women's Forum viewpoint is always a great place to capture stunning Gorge panoramas.

One late-February morning I was back at, stopping by my new favorite vantage point for another sunrise.  Now a month later meant getting up even earlier to catch the sun.  But I arrived at Jonsrud with a few minutes to spare.  This time fog cloaked the Sandy River valley, adding a bit of mystery to my images.

One advantage of Daylight Savings time - it pushed the sunrise back one hour.  Now I don't have to get up quite as early, at least for awhile.  I see more lovely sunrises in my future - Think I'll charge up my camera battery and stop by Jonsrud viewpoint on my way to the mountain this weekend!